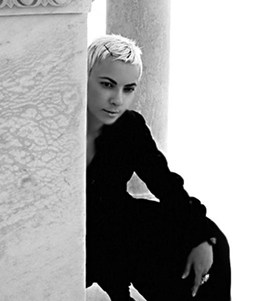 In 1978 graduates music school, piano speciality. Since her early years, music and drawing become her two biggest passions. She starts participating in local exhibitions with her early artworks, depicting the scenes of Russian folk tales, the nature and landscapes of her native land.

In 1980 graduates choirmaster school, as a choir conductor.

In 1986 graduates the Rostov specialized school of arts.

In 1991 graduates the Rostov State Conservatoire, opera singer specialty (mezzo-soprano). Moves to Moscow, Russia. Visits the United States for the first time and discovers the extensive universe of abstract art, which wasn't yet adopted in Russia, and was previously formally prohibited in the Soviet Union.

In 2003 completes the course of the Central Saint Martins College of Art & Design in London.

In 2004 graduates the Moscow State University, “Sociology Of Fashion” specialty.

2005 – Becomes the co-founder of the first ever golf-related Awards in Russia.

Working with conceptual fashion and design culminated her journey to centering her artistic capacity majorly on art.

2009-2011 – Her painting and collages are used as a part of deluxe apartment interior designs in Russia, Spain and the United States.

Her art is currently represented in a variety of galleries all over the world.

Elena Kozhevnikova is widely recognized as a seasoned artist, exhibited all around Europe and the United States.